About 30 people rallied outside Health Minister Bruce Fitch’s office in Riverview on Monday, November 7 to express their opposition to recent moves by the New Brunswick government to allow privatization of health care.

The rally, organized by the New Brunswick Health Coalition, coincides with Fitch and his provincial and territorial counterparts and the federal health minister meeting in Vancouver.

On October 26, the Higgs government introduced legislation to allow Medicare to pay for more surgeries and medical procedures outside hospitals, a move opposed by the coalition.

After having transferred the management of ambulance services, extra-mural services, Tele-Care and NB Health Link to Medavie, a private health care provider, the coalition says that Premier Blaine Higgs now wants more health services to be provided by private companies and that would only make the health care crisis worse.

According to Bernadette Landry, co-chair of the Coalition, “By turning to private companies to deliver health care services, we are losing control of our public health system.”

“We lose control of the direction we want the system to take, we lose control of its staff, infrastructure, equipment, technology, costs, etc. In the public system, managers are accountable to MLAs and to the Legislature. That way we know what’s going on, but when that responsibility is transferred to a company, they may withhold the information to protect their business interests,” said Landry.

Daniel Legere, labour co-chair of the coalition and president of the New Brunswick Federation of Labour, added, “The most obvious consequence of privatization of health care is that these companies will take staff from within the public health care system: from hospitals, public clinics and nursing homes. Therefore, the already critical shortage of staff in the public system will only get worse.”

Steven Staples with the Canadian Health Coalition agrees: “Increased reliance upon for-profit delivery of health care services will lead to a two-tiered health care system that will take doctors, nurses and other front line health care workers out of the public system, making the current crisis in hospitals even worse.”

Canadian Federation of Nurses president Linda Silas told the federal and provincial and territorial ministers to “stop squabbling” as they gather for the first time since 2018.

“The federal government should work with the provinces and territories to increase federal funding through the Canada Health Transfer that is accountable, while improving outcomes through new programs such as public dental care and universal pharmacare,” added Staples.

The New Brunswick Health Coalition represents thousands of health care workers and community organizations from across the province. The coalition is calling on the Premier of New Brunswick to reverse his move to add private delivery to the health care system. 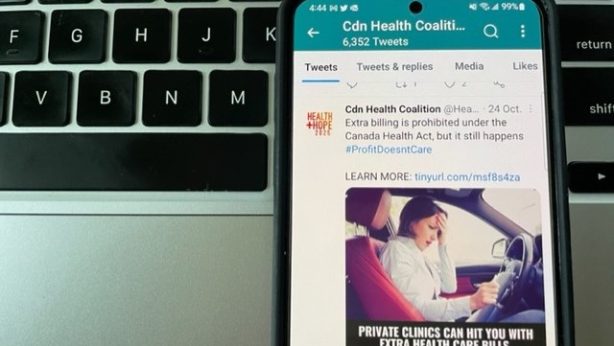